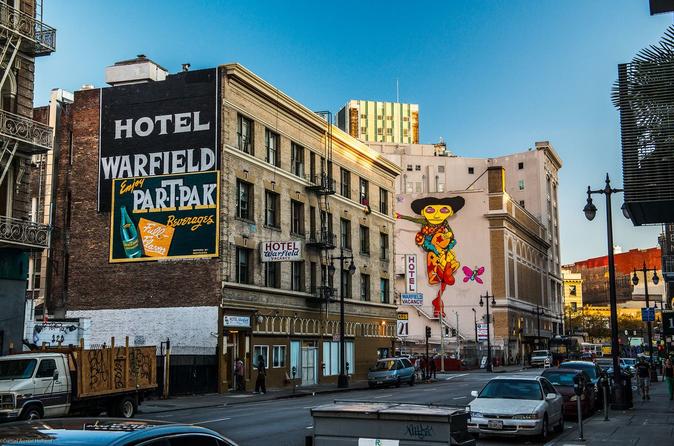 New communities in TL SOMA, Mid Market, Financial District. Get New employees immersed in TL Mid Market area. See the cultural differences.-- see what living in this community is really about. Learn about the TL. Barriers and obstacles that people experience in this area.

DEL SEYMOUR has spent many years on the very streets where he now conducts the tours.  An Army Veteran, Del went back to his home in Chicago in 1969 and immediately left for California. In his time in San Francisco, he has seen the area from all angles: as an addict living on the streets, as a taxi driver, as a husband (for only fifteen minutes--his self-described "Hollywood marriage"), as a volunteer at one of the many service organizations. His idea for Tenderloin Walking Tours stems from his love of the neighborhood. He works in conjunction with many of the social agencies in the Tenderloin (he serves on the Board of The Gubbio Project among others) and also the companies that have moved into the Market Street corridor and has received the respect of everyone he involves. His knowledge and communication skills make him an ideal ‘docent’ for the area.

PAM COATES is a community activist, social historian and performer. Having survived an abusive marriage which left her on the streets with PTSD, she now serves on her Landlord’s Board of Directors, has worked as a peer counselor and gives talks both on tenants’ rights and domestic violence. A classically trained actress, she has worked with The Royal Shakespeare Company, been in several British TV productions and, more recently, been a member of The San Francisco Recovery Theatre, which has led her to a new career as a jazz singer resulting in many Bay Area gigs and a CD. Born and brought up in London’s East End, she has been a resident of the city for 27 years and loves to combine her accumulated knowledge and storytelling talents to promote the neighborhood that is her adopted home.

The Tenderloin is a neighborhood in downtown San Francisco, California, in the flatlands on the southern slope of Nob Hill, situated between the Union Square shopping district to the northeast and the Civic Center office district to the southwest. It encompasses about 50 square blocks, is a large wedge/triangle in shape (point faces East). It is historically bounded on the north by Geary Street, on the east by Mason Street, on the south by Market Street and on the west by Van Ness Avenue. The northern boundary with Lower Nob Hill historically has been set at Geary Street.

The terms "Tenderloin Heights" and "The Tendernob" refer to the area around the indefinite boundary between the Upper Tenderloin and Lower Nob Hill. The eastern extent, near Union Square, overlaps with the Theater District.

Part of the western extent of the Tenderloin, Larkin and Hyde Streets between Turk and O'Farrell, was officially named "Little Saigon" by the City of San Francisco.

New communities in TL SOMA, Mid Market, Financial District. Get New employees immersed in TL Mid Market area. See the cultural differences.-- see what living in this community is really about. Learn about the TL. Barriers and obstacles that people experience in this area.