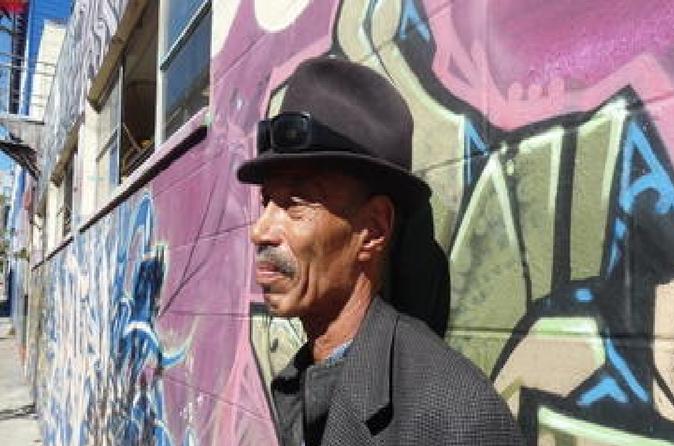 90-minute tour showcasing the positive and rich history of the TL with 30-year resident of the TL Del Seymour and resident tour guides. Your guides: 111 TL Walking Tours will inspire you not to avoid the Tenderloin.

Situated amidst some of San Francisco’s most expensive real estate is an often avoided and almost always overlooked neighborhood - The Tenderloin. The Tenderloin is much maligned. It’s a gritty area, on the surface unwelcoming and dangerous. The streets are busy with traffic and people, some hustling & dealing, some using, many homeless. However, many are just being neighborly. The sidewalks are the front yards for many in this area of high density housing. Working class families with children, grandparents, aunts, uncles and cousins live here. Local businesses flourish. There are auto body shops, printers, bakers, restaurants (some of which are the best in the city), theaters, clubs, bars, barbers, the oldest Cambodian grocery in the States, artists workshops. The neighborhood teems with talent, character, creativity, entertainment – and history.

DEL SEYMOUR has spent many years on the very streets where he now conducts the tours.  An Army Veteran, Del went back to his home in Chicago in 1969 and immediately left for California. In his time in San Francisco, he has seen the area from all angles: as an addict living on the streets, as a taxi driver, as a husband (for only fifteen minutes--his self-described "Hollywood marriage"), as a volunteer at one of the many service organizations. His idea for Tenderloin Walking Tours stems from his love of the neighborhood. He works in conjunction with many of the social agencies in the Tenderloin (he serves on the Board of The Gubbio Project among others) and also the companies that have moved into the Market Street corridor and has received the respect of everyone he involves. His knowledge and communication skills make him an ideal ‘docent’ for the area.

PAM COATES is a community activist, social historian and performer. Having survived an abusive marriage which left her on the streets with PTSD, she now serves on her Landlord’s Board of Directors, has worked as a peer counselor and gives talks both on tenants’ rights and domestic violence. A classically trained actress, she has worked with The Royal Shakespeare Company, been in several British TV productions and, more recently, been a member of The San Francisco Recovery Theatre, which has led her to a new career as a jazz singer resulting in many Bay Area gigs and a CD. Born and brought up in London’s East End, she has been a resident of the city for 27 years and loves to combine her accumulated knowledge and storytelling talents to promote the neighborhood that is her adopted home.

90-minute tour showcasing the positive and rich history of the TL with 30-year resident of the TL Del Seymour and resident tour guides. Your guides: 111 TL Walking Tours will inspire you not to avoid the Tenderloin.